A golden rule in a speech or presentation is that disturbances take precedence. We saw this last Monday evening in Mark Rutte's speech about the second lockdown. We saw at the beginning that he was distracted by the whistling and noise coming from the protesters outside. Everyone at home was probably confused checking to see if the squeaks and whistles were on their TV. So listening very carefully at the start was difficult. Still, Rutte tried to focus. His hands clasped tightly on the paper speech in front of him. By concentrating on the autocue and because he tried not to listen to the protesters outside, it was no longer possible to turn the pages in time.
The pressure was high 8.4 million viewers watched. Naming the malfunction was very nice and gave room. After that, Rutte was more in his role and we were able to listen better. As far as I am concerned, it could have been done much earlier, but understand that this was perhaps also difficult.

Rutte:
"And the reality is that we are not dealing with a harmless flu, which some - say the protesters out here - still think, but with a virus that can hit anyone hard."

So, by mentioning disturbances during your presentation, instead of denying or opposing them, there is room for the audience to listen better to the core message. It also shows that you are a worthy natural leader, who takes control and is fully present in the here and now. Class.
So golden rule: failures always come first! 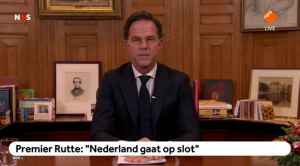 Read experiences with Speechcompany at Springest ...
Speechcompany and COVID
Scroll to Top
We use cookies to ensure that our website runs as smoothly as possible. If you continue to use the website, we will assume that you agree.OkPrivacy policy